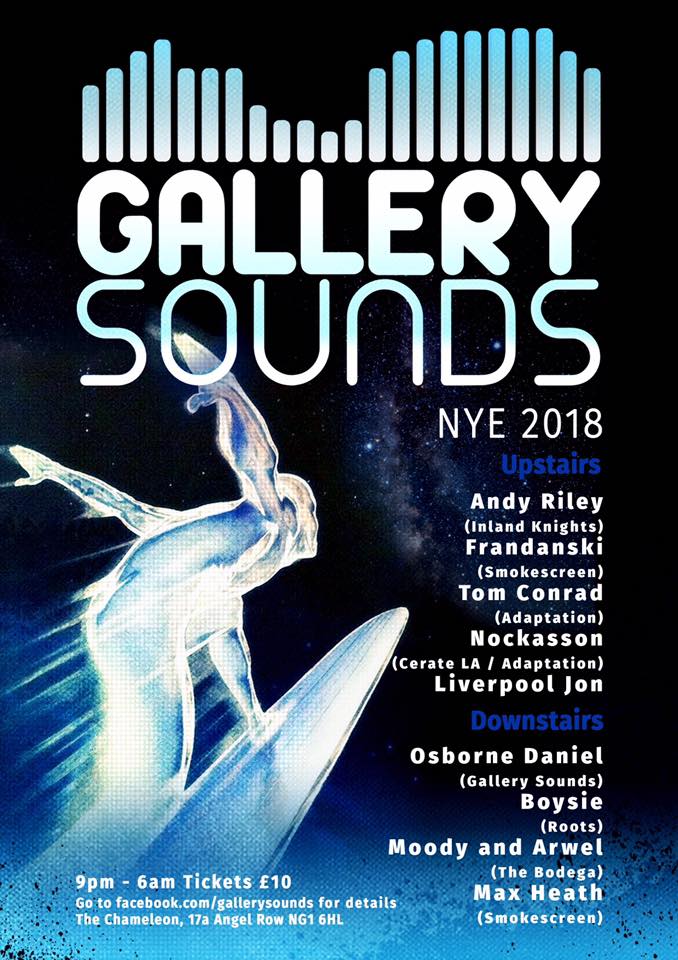 Gallery Sounds NYE
Gallery time once again. For what ails you, we party into 2019 with a full party DJ roster, and see 2018 out in style.

Frandanski (Smokescreen) Another missile in the Smokescreen silo and to devastating effect as we get the ever consistent Frandanski dropping the Bottom Line and beyond. Crunchy beats all the way.

Andy Riley (Inland Knights) one of the most respected House DJs and producers in the UK. The established Drop Music label catalogue is replete with Funk laden grooves often times used as a conduit through his alter ego ‘Inland Knights’ alongside co-creator Laurence Ritchie. As a solo player, he brings his deepness to the table every time.

Tom Conrad (Adaptation Music) is our first time guest and has been making waves for a few years on his label Adaptation and on the likes of King Street, Seasons Recordings and Bonzai Music to name a few. Tom is a regular DJ in Prague (Czech Republic) and has played at numerous venues in the UK and Europe over the years whilst running his radio show for the last decade alongside reputable international guests on alternate Saturday nights.

Nockasson (Adaptation Music) is a Birmingham based DJ/producer with his first project on Adaptation being as a duo under the moniker of ‘L.A Cerate’ who then went on to remix the 50th release by none other than Demarkus Lewis. Following this, his first solo project ‘Punch Drunk EP’ was released, with many more in the pipeline. As him and Tom Conrad are lifelong friends expect the same richness in music.

Liverpool Jon: Perfect warm up to the proceedings with record collector and free party DJ, Jon. Jon has played with Smokies, DiY and Deep Cartel amongst others in the free party laden days of yore, with a collection that bridges all the aforementioned sound systems.

For the bar vibes
Osborne Daniel (Gallery Sounds) The many facets of Jazz Funk and it’s environs, with an extra Funk kick…or it’s better if you just give him a listen and enjoy. The Funk chronicles beckon…

Boysie (Roots) The master of all he surveys in terms of Roots music, with an astonishing collection of Jamaica’s major players back down the line. Soulful and deep.

Moody and Arwel (The Bodega) We welcome this pair to the party, who have been holding down a residency at The Bodega, with their Post Punk and Psychedelic Rock outpourings, as we enter the country of the eclectic.

Max Heath (The Bodega/Smokescreen) One of Nottingham’s finest tune slingers, enters the fray with his amazing collection of music, segueing effortlessly into the line up.