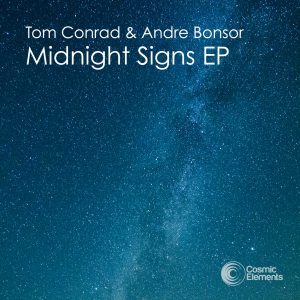 Cosmic Elements welcome Tom Conrad & Andre Bonsor back to the label with ‘Midnight Signs EP’, which consists of three completely different tracks in the form of nu-disco, deep house and lounge/chillout.

The EP opens with ‘Wollaton Nights’ (pronounced ‘wool-a-ton’) which is an ode to the name of the studio where it was made and also the area where Tom lived at the time. It’s a very deep, atmospheric track laden with infectious jazzy melodies and one for the discerning listener. Next up is a driving deep house track entitled ‘Cassiopeia’, aptly named for its atmospheric space like groove. Completing the EP is the lush downtempo sounds of ‘Desiderate’, a smooth laidback groove with warm chords, funky bass, broken beats and overall chilled vibe.