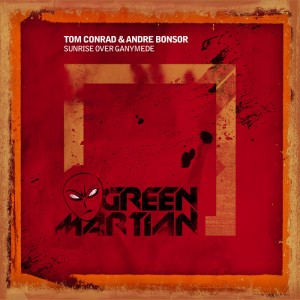 UK based duo Tom and Andre team up for a wonderful slice of prog house with a couple of quality remixes. Tom has an impressive CV in EDM, growing up with the sounds of the 80’s with New Order and Tears For Fears and later on the Rave scene. Clubbing and working all over the English Midlands it wasn’t long before production called and releases on Seasons Recordings, Open Bar and Sniff Your Ears Recordings to name a few would follow. Andre has seen releases on the same labels and the guys have joined forces on a few occasions in the past. “Sunrise Over Ganymede” comes with 2 great remixes.The original is a real treat, starting off with a sweet melodic sound, sharp crisp hats are soon followed by a perfect kick. The melody continues throughout with lots of different sounds playing a role, a nice pad lies in the background. The bassline takes hold and a steady hypnotic rhythm is formed, classy stuff.DJ and Producer Rishi Gargour aka Rishi. K is at the controls for the first of 2 remixes. Rishi’s “White Crane” on GM was well received and here his talents shine yet again. Moving into the deeper end of prog house with a deep thud on the kicks and a sublime bassline. Lots of FX fill the spaces and some very nifty instruments play a big role here, very well crafted remix indeed.Van Bellen is up next with a superb solid groover. Spanish producer Yoogie offers up a taste of epic progressive house vibes, fully charged chugging bassline with a host of wonderful FX gets under your skin and holds you in its grip, huge sound here and will be on a lot of playlists for sure.