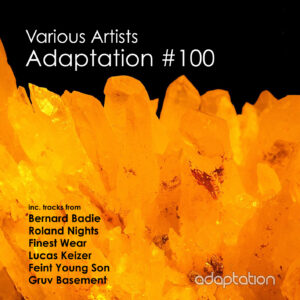 “Class A remixes! Will be supporting these and congrats on 100!”
DUTCHICAN SOUL (SALTED MUSIC / SOULFURIC / PURPLE MUSIC)

“Very happy to be a part of this release… :-)”
FINEST WEAR (LARGE MUSIC / NORDIC TRAX)

“The perfect package to celebrate this milestone..”
SPIRIT OF HOUSE (REVIEWS)

Adaptation Music’s landmark 100th release is nothing short of epic with music from Roland Nights, Bernard Badie, Finest Wear, Lucas Keizer, Feint Young Son and Gruv Basement. There should be something for everyone here, with deep, jackin, soulful and classic house sounds on offer.

After joining us for our 50th release, Roland Nights is back for our landmark 100th with another deep jackin house cut of Tom Conrad & Mr V’s ‘Sign of the Times’, with an infectious bassline and killer strings. With several Traxsource #1 singles to his name, Roland Nights has been producing music for numerous labels such as Large Music, PIV Records, King Street & Lost My Dog over the last decade.

Denver based DJ and producer Lucas Keizer has reworked the D-Reflection and Christa’s ‘Make Believe’ and what a fantastic remix it is. With all the elegance and beauty of the original, Lucas reworks it into a classy deep house cut. Having been on labels such as Large Music, Salted, PIV Records, Guesthouse and Tango, Lucas’ music is widely supported throughout the scene from the likes of Mark Farina, John Digweed, Dubfire and DJ Dan.

London based Finest Wear provides an old school deep house remix of Tom Conrad and Dawn Tallman’s ‘So Happy’ which was one of Adaptation Music’s early releases. Finest Wear will no doubt be a very familiar name to fans of deep house and his classic sound can usually be found on Large Music and Nordic Trax.

If you’re a fan of the Murk Records, Danny Tenaglia or Twilo sound from yesteryear, then Bernard Badie ‘Bones’ will be right up your street. The bluesy main vocal from Muphan and backing vocals from Dajae and Olandus sit on top of a dark driven late night vibe with a classic sound. Raised in Chicago and now residing in Atlanta, Bernard’s been releasing music since 1991 under various monikers alongside Larry Heard and various vocalists including the legendary Dajae on labels such as Defected, Cajual, Mojuba and more.

Feint Young Son is the new alias of one half of Studioheist, who does a stellar peak time deep jackin house remix of Yan Gordo’s ‘Take It Easy’ which is sure to be a hit with any discerning DJ. Manchester duo Studioheist will also be a familiar name to deep house fans with most of their music being found on Large Music along with the likes of King Street, Papa Records and Moulton Music.

Gruv Basement return to the label with a beautiful soulful rework of Sueno Soul and Denzie’s ‘What You Want’. The soulful scene isn’t often ventured into by Adaptation Music these days but we had to make an exception for the excellent Gruv Basement, whose jazz and soul infused sound is equal to that of the Chicago soulful house sound, by artists such as Glenn Underground.